Another Santa is Slain:

It all ends in a grim fashion.

Alan Lake, notable actor and husband to the late Diana Dors, drops his son at a railway station and bids him farewell, stopping briefly to watch as the teenager boards a train. The huge electrical beast takes the strain of the carriages as it wheezes away from the platform and Lake searches his feeling as he watches his son go, but there’s just numbness. A vacant space where his heart once belonged.

He drives back to the family home in Sunningdale, a little way south-east of the famous Ascot racecourse, and hurries into the house, careful to avoid locking eyes with a neighbour. Inside, he stops for a moment and takes in the silence. A few years ago, there’d been little room for moments of quiet amid the parties, constant stream of visitors, and children left to their own devices careering up and down the stairs until late in the evening. Good times. Until it all stopped the moment she left him. Of course, it really ceased once Diana became ill, but the silence, the terrible silence, began on the 4th of May that year, five months and six days now.

Lake wanders into the lounge, stopping briefly to regard a family photo above the fireplace. Diana sitting, her hands on the pushchair in which their son, Jason, is seated. Lake is beside his wife, one arm around her. He’s wearing a sailor’s cap and has grown a full beard. She never particularly liked the beard, Lake remembers. He almost allows himself a smile, then, upon catching his reflection in the huge mirror, the emptiness returns and the silence seems louder than before. Lake returns the photo to the shelf and goes to find his gun.

It’s fair to say that when Don’t Open Till Christmas went on general release on 19th December 1984 it failed to ignite the barely aflame UK slasher scene. The Golden Age of the Slasher, a period of sometimes notable yet often poorly-reviewed films (mainly of US origin) was but an ember by the tail-end of the year. Aside from a few late entries, the most high profile of which, A Nightmare on Elm Street, released the previous month, the moment had passed. Don’t Open Till Christmas would not feature in future appraisals of classic slasher films.

The film was the brainchild of American producer Dick Randall who’d settled in the UK in 1981 after a globe-trotting career, surfacing in Rome and Hong Kong at various points. Riddled with debt following two failed Broadway shows, Randall discovered the best way to a quick buck was to eschew artistic endeavour in favour of quick and, importantly, cheap film production. Thus, Randall became synonymous with cheapie erotica, gialli, westerns, documentaries and horror, responsible for such illicit delights as The French Sex Murders, Frankenstein’s Castle of Freaks (a rare directorial turn – depending upon who you believe), The Clones of Bruce Lee, and Pieces.

The latter, a Spanish/American co-production, featured regular collaborator Edmund Purdom, a former matinee idol and member of the Stratford-upon-Avon Royal Shakespeare Theatre who’d arrived in Italy in 1958 to play the lead role in television film Sword of Freedom. Broke and with no calls from Hollywood, Purdom decided to stay and try his luck in the then expanding Italian film industry, rebuilding his career with period pieces and giallo films including The Fifth Cord, Perfume of the Lady in Black and What Have They Done To Your Daughters? It wasn’t long before Purdom soon began a fruitful working relationship with Dick Randall.

By the time Randall had decided upon taking a shot at a British slasher to cash-in on the current boom being enjoyed Stateside, it was 1982. Pieces was already on release in Spain, where most of the film had been shot, and doing reasonable business and there were plans for a US release the following year. But Randall thought they could go one better with a Christmas-set horror film, exploiting both the festive season and the public’s penchant for blood and nudity. If a home run was the aim, by doubling-down on sub-genres he was sure to clean up at the box office, Randall surmised.

A script was quickly written by Derek Ford, a seasoned writer and director of sexploitation films including the wildly successful The Wife Swappers. Ford, originally a radio and television writer, had graduated from essaying Simon Templar’s adventures in The Saint to entering the sexploitation subgenre via a Swedish film that required a little tinkering.

Ford handed in his draft of Don’t Open Till Christmas but stayed close to the forthcoming production, keen to take on directorial duties. Edmund Purdom, however, had other ideas. Insisting that he be allowed to direct if he was to sign on to star in the film, Randall acquiesced despite Purdom’s complete lack of experience and the actor duly signed on and the gears began to turn on Dick Randall’s big white (snow-related) hope.

Here’s where things get a little hazy. Depending upon who you believe, production began in 1982 or 1983. The general consensus is that the film took a full two years to pull together into some kind of workable form. Watch The Making of a Horror Film, a weirdly tongue-in-cheek documentary on the production, though, and Randall clearly states: ‘The picture took almost a year to make…..and you know what the reason is? It’s very hard to kill Santa Claus.’

However long it took, there’s no doubting that it was a very troubled and muddled time for all involved. Purdom quickly demonstrated his woeful lack of ability behind the camera and it soon became clear that offering someone with no pedigree a free hand to direct a film would lead to potential ruin. Despite the increasingly insurmountable challenge, Purdom retained some of the twinkle and candour of an old Hollywood star: ‘I’ve always been absolutely fascinated in horror and suspense, ever since one of my wives nearly did me in, in the bath.’

As the production struggled on, Randall and co-producer Stephen Minasian’s consternation at the quality of dailies was reaching breaking point. Minasian, formally one of a trio of financiers who’d agreed to distribute a horror film from a young Sean Cunningham who’d enlisted former English teacher, Wes Craven, to direct what would eventually become The Last House on the Left, wanted Purdom fired and replaced. Instead, Purdom walked anyway, ostensibly unhappy at the interference and the direction the film was moving in, though probably acutely aware how out of his depth he was and looking to save face.

With their director out of the picture; though not literally, Purdom had stayed on to complete his role as Chief Inspector Harris. No doubt this could have been an awkward situation for the incumbent director had it not been the film’s writer, Derek Ford, who was duly assigned the role. 48 hours later, however, Ford – allegedly due to his fondness for calling for alcohol over calling ‘Action!’ – was gone and Ray Selfe was promoted from his role as editor. Selfe, whose experience (much like Ford’s) was largely in sexploitation films including White Cargo starring a pre-Only Fools and Horses David Jason, suggested extensive reshoots in order to up the gore and nudity, drafting in writer Alan Birkinshaw to beef up the script, rewrite the ending and include a particularly gruesome scene in The London Dungeon. The owners were reportedly so upset with the scene that they refused to allow a film crew to record at the tourist attraction again.

Birkenshaw, another sexploitation alumni member did have previous experience of making a horror film with his own 1978 effort, Killer’s Moon, was eventually credited in the film’s title sequence as Al McGoohan, possibly at his own insistence. Given that the credit also states Birkenshaw (under his pseudonym) both wrote and directed additional scenes, it’s anyone’s guess as to who was actually in command of the film’s direction at any given point during production. Even more confusingly, Edmund Purdom eventually returned as director to complete filming.

Whether the film’s eventual release to coincide with Christmas 1984 was a success is not clear. There is very little information available about the success – or lack thereof – of Don’t Open Till Christmas at the box office. It’s highly unlikely that reviews were positive and even the inclusion of genre favourite Caroline Munro in a strange cameo playing a cabaret version of herself was unlikely to bring in the kind of numbers to boost the coffers.

It’s a strange hotchpotch of a film. Narratively foggy with a mixture of reasonable to dire performances, Don’t Open Till Christmas does, however, fulfil its slasher promise with 14 murders across the runtime, plenty of nudity and blood. The film also features a number of relatively recognisable British television faces. Kevin Lloyd (The Bill), Belinda Mayne (Doctor Who), the aforementioned Caroline Munro, Alan Lake (Slade in Flame), and Kelly Baker who would go on to feature with Munro in a later slasher production from Randall and Minasian, Slaughter High.

Don’t Open Till Christmas is very much a film of early 80s Britain. There are two particular moments of lurid homophobia, each presented in a very throwaway fashion as a kind of comedy aside. Both the slurs and nudity (and indeed frequent bloody murders) are clearly included to appeal to a male twenty-something audience. By today’s standards, homophobia, in particular, is egregious and offensive though I shall stop short at stating it’s problematic (a term that’s become synonymous with pontificating and crying foul about creative endeavours featuring difficult content rather than understanding the period within which they were produced). Times and attitudes have, of course, changed and such language is a document of a different era. Could the slurs be removed? Yes, they have little bearing on the film plot-wise though I’m not going to comment further here on whether they should actually be excised from future releases.

Overall, though, despite its numerous faults, Don’t Open Till Christmas has become something of a perennial watch; a grubby counterpoint to the glitz and sheen of Christmas. Mean-spirited, often confusing and edited with a butter knife, there’s something joyous about watching a fictional crazed killer stalk the familiar streets of 1980s London rather than Crystal Lake or Haddonfield. In final defence of the film, having the killer bump off (mostly) numerous white, middle-aged men as opposed to teenage females is quite a refreshing change.

While Don’t Open Till Christmas will likely never gain classic or likely even cult status – at best, it tends to headline ‘so bad it’s good’ listicles – the film is still hanging around like a vagrant Santa in December nearly 40 years on and is often the subject of some discussion at this time of the year. Yet, it’s difficult to investigate with any degree of accuracy since the film remains shrouded in production mystery. Tragedy too hangs over Don’t Open Till Christmas like an oppressive fog. Aside from the death of Alan Lake, actor Gerry Sundquist was also to take his own life within 10 years of the film’s release, marking it as a kind of grim relative of Slaughter High (Simon Scudamore, who played nerdy outcast Marty Rantzen, committed suicide shortly after production ended).

Perhaps what draws people back to the film is the sheer wonder that it ended up being completed at all. Maybe it was the bloody-mindedness of the production team. Or perhaps, a little Christmas magic helped bring the film into being. Regardless of whether you feel the film should exist – exist it undoubtedly does. And it’s here to stay. At least for this Christmas.

And so, back to Dick Randall’s maxim: ‘It’s very hard to kill Santa Claus.’ 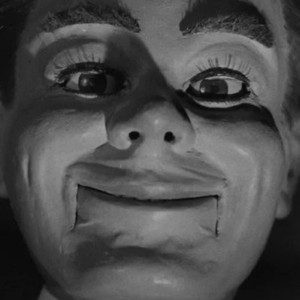